According to a study from 2014 by The Center for the Study of Religion and American Culture at Indiana University and Purdue University more than half of  American population (55%) read the King James versions of the Bible. The King James Bible is considered a literal or “word for word” translation. Means, translators convey the literal meaning of the original text. Today I am going to be presenting a brief history of the King James Bible and its importance for English language and literature.

A  History of the  King James Bible

Imagine what life was like in the England of 1604.  A world like ours where speed, change, and innovation are consciously cultivated and thoughtlessly celebrated was elusive. Their world moved at an incredibly slow pace and continuity was the norm.

Then, the crowning of a new monarch was a grand event that had a deep had impact on the life and identity of the nation. The King ruled for life. There was no continuous election cycle or campaigns in their world as there is today in most societies.

When King James I assumed the throne of England he found the Established Church in an incredibly devastating state. There were lots of Conformists, who were satisfied with the status quo, and were willing to conform to already existing usages.

On the other side, there were Puritans, who weren’t comfortable with the status quo and were determined to make a change. This division of people sent an appealed to the king, and they (Puritans) had great hopes their appeal will be granted.

In the year 1603 October, James called for a conference, to meet in Hampton Court Palace, by January the coming year, solely for hearing and for the assessing things supposedly missing in the Church.

It will be interesting to note that, the Conference was a failure because the major issues to address went unattended to. This, however, laid a foundation for the movement for the version of the English Bible, now so widely accepted.

Those who made it to the occasion were the leading divines, lawyers, and laymen of the Church of England. Others were Dr. John Reynolds, President of Corpus Christi College, Oxford. In the course of his discussion on the second day of the Conference, this gentleman, suggested to the king, that a new version was extremely important, because of the numerous errors in the present version in use. This suggestion gave rise to immediate steps which, after some little delay, birthed the King James’ bible.

The Church, however, resisted the movement for a short while, because they suspected some Puritan mischief to be behind it. The Puritan party pressed immediate action, and the king who was mindful not to offend either side, and ensure He keeps their hearty cooperation intact, decided to favor the proposition of the Puritans, but on the other hand pronounced the Genevan version to be the worst of all in the English language, and thereby pleased the Conformist party. 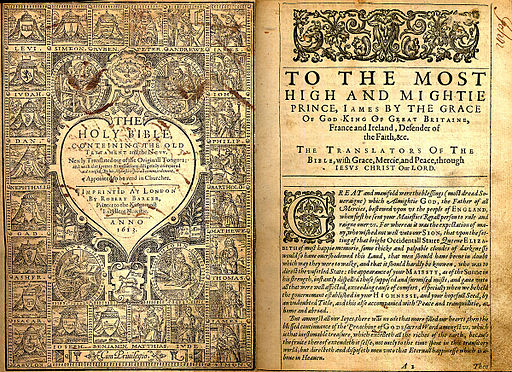 All arrangements and plans for the King James Bible were completed by the appointment of fifty-four (54) highly educated /learned men, who were also responsible to suggest other competent persons, that the said translation may have the help and furtherance of all our principal learned men within the kingdom.

So King James ordered a new translation. It was to be accurate and true having its originality intact. He finally appointed Fifty (50) of the kingdom’s finest language scholars and set out rules for carefully checking the results.

King James also wanted a widespread and popular translation, hence He insisted the translation come in old familiar terms and names and is readable in the idiom of the day.

It was also made clear that King James wanted no biased notes attached to the translation, as in the case of the Geneva Bible.

The Rule Number 6 stated: “No Marginal Notes at all to be affixed, but only for the explanation of the Hebrew or Greek Words.”

In addition, King James was in search for a single translation that the whole Kingdom could rely on “To be read in the whole Church,” according to him.

He decreed and emphasized that special pains and efforts be taken to ensure a uniform translation, which should be done by the best-educated men in both Universities, to be further reviewed by the Bishops, presented to the Privy Council, and lastly sanctioned by the Royal authority.

The translation was completed in 1611, after seven years of hard work. Translation is known as King James Bible (KJB), King James Version (KJV) or Authorized Version (AV). Several editions of KSB have been made from 1611.

The success of the  King James Bible

Consider how ridiculous it was to have a team of elite scholars writing for a largely unlearned public. We can only stand back in total astonishment at their huge achievement. Thinking of how massive the translation mandate was. It called for a product geared towards reinforcing a clear-cut royal political agenda, to be executed by elite scholarly committees, reviewed by a self-serving bureaucracy, with ultimate approval reserved to an absolutist monarch.

The final product was intended primarily for public and popular consumption. It was to be read orally — intended more to be heard in public than to be read in private.

How many works of literary genius do you recall that was done by committee? How many premier scholars are you aware of who can write for the ear? Not to mention for a context intended to evoke a spirit of worship!

How convinced would anyone have been that a team of about 50 could handle the technical and linguistic challenges while at the same time producing a work with a cadence, rhythm, imagery, and structure that would resonate so immensely with the consciousness that it shaped a civilization and culture in such a unique and extraordinary way?

However, history has it that they were largely successful in birthing a translation that not only met the needs of their generation but also succeeded in influencing, shaping and affecting the lives of generations yet unborn.

The Literary Influence of the King James Bible

The King James Bible has great influent in the English language.  Its language has inspired poems, novels, and other writings spanning four centuries and every English-speaking literary tradition.
Manifold Greatness curator Hannibal Hamlin talks about the literary influence of this Bible version  in short video:

The King James Bible ( Authorized Version) became one of the most influential books in English language and the standard for English-speaking Protestants. Its flowing language and prose rhythm have had a very great influence on the English literature and culture of the past 400 years.

What is your opinion about the importance of King James Bible for English language, literature, and culture? Please drop your comments below.

View all posts by Igor

4 Replies to “The King James Bible – History and Importance”